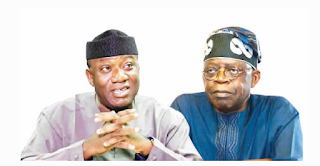 The South-West Agenda for Bola Ahmed Tinubu 2023 (SWAGA) has accused Governor Kayode Fayemi of Ekiti of undermining the APC ward congresses, claiming it resulted in violence, killing one person.

Specifically, a former Minister of State for Works, Dayo Adeyeye, described Saturday’s APC ward congresses in Ekiti as “a sham and unacceptable.’’

Mr Adeyeye alleged the congresses were characterised by manipulations and irregularities, which recorded one death. The one-time spokesman for the Senate, who belongs to the SWAGA, spoke with journalists on Sunday in Ado-Ekiti.

He alleged that Mr Fayemi’s administration made several attempts to disenfranchise his group from partaking actively in the exercise.

“We want to believe that the Caretaker and Extraordinary National Convention Planning Committee (CECPC) of our party meant well when it gave the go-ahead that ward congresses should hold across the country on Saturday. The ward congresses purportedly took place in Ekiti, but the manner of their conduct was nothing near all democratic norms,” he said.

Mr Adeyeye alleged that before the congresses, the ‘Tokan-Tokan,’ a group loyal to Mr Fayemi, constituted a seven-man electoral committee with no input from many party stakeholders in the state.

“This is even as the CECPC had earlier advised that effort should be geared towards a peaceful resolution of conflicts so that the APC could birth consensus delegates across the board,” he noted. “You will recall that the Ekiti chairman of SWAGA, Sen. Tony Adeniyi, had issued a statement that having consensus arrangement might not be possible in Ekiti because of the determination of the Tokan-Tokan group to dominate and control the soul of the congresses.”

He added, “In places such as Ijero, Ado-Ekiti, and Oye local government areas, extreme violence was visited on the people, leading to one death in Ado-Ekiti Ward 10. We are hereby telling the CECPC, our party members nationwide and indeed all Nigerians, that there was no congress in Ekiti on Saturday,” Mr Adeyeye added.

But the Ekiti APC denied the allegations, saying the congresses were peaceful and orderly.