End use of fossil fuels before it destroys earth: Guterres - The Naija Weekly

Home News End use of fossil fuels before it destroys earth: Guterres

End use of fossil fuels before it destroys earth: Guterres 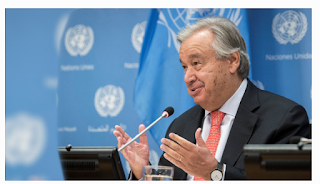 The UN Secretary-General Antonio Guterres has called on developed countries to provide more money for climate change adaptation in poorer parts of the world, saying the world must sound a death knell on the use of coal and fossil fuels.

Mr Guterres made the call on Monday following the alarming report issued by the Intergovernmental Panel on Climate Change (IPCC) about the consequences of earth’s warming.

He demanded that politicians around the world must take swift and drastic action.

“The alarm bells are deafening, and the evidence is irrefutable

“This report must sound a death knell for coal and fossil fuels before they destroy our planet. If we combine forces now, we can avert climate catastrophe,” he said.

Mr Guterres also called on development banks to provide more money for climate change adaptation. He said an earlier pledge to raise $100 billion a year for this must be fulfilled.

“There is no longer room for delay or excuses,” Mr Guterres said, demanding that world leaders deliver answers at the next global climate change summit in November in Scotland.

The meeting is seen as the most critical since a gathering in Paris in 2015.

In the IPCC report, the panel sounded a dire warning, saying the world is dangerously close to runaway warming and that humans are “unequivocally” to blame.

Drawing on more than 14,000 scientific studies, the report gives the most comprehensive and detailed picture of how climate change is altering the natural world and what could still be ahead.