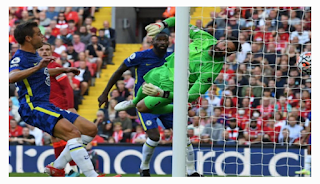 Chelsea held Liverpool to a 1-1 draw at Anfield in their English Premier League game on Saturday.

Thomas Tuchel’s side took the lead 22 minutes into the game at through Kai Havertz’s sublime header.

The Reds, however, levelled up from the spot in first half stoppage time.

Chelsea nemesis, Referee Anthony Taylor, did not hesitate to show defender Reece James a red card for a hand ball on the goal line, after VAR called his attention, while awarding Liverpool a penalty.

With Chelsea reduced to 10 men, Liverpool mounted much pressure but could not see get the ball behind the net as the Blues remained resilient.