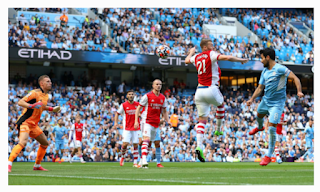 Torres doubled City’s lead five minutes later, while Granit Xhaka got sent off in the 35th minute for a reckless tackle on Cancelo, compounding the woes of Arsenal.

Jesus made it three for City in the 43rd minute of first half, while Rodri scored City’s fourth goal in the 53rd minute.

Torres got his second goal in the game, making it five for City in the 84th minute.

Today’s humiliating defeat comes after the gunners have been trashed in their first and second game by newly promoted Brentford and Chelsea.