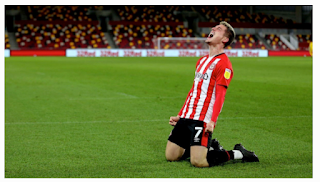 Arsenal, who ended last season in 8th position, continued with their poor performance in the new season.

Brentford took the lead 22 minutes into the first half as Sergi Canós buried a shot behind Leno.

Canos’ goal is the first ever Premier League for Brentford.

With Friday night three points, Brentford presently sit on top of the EPL table, while Arsenal rank last on the table.

The gunners will play against London rival Chelsea at the Emirate next week.