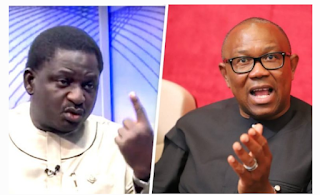 Femi Adesina, spokesman to President Muhammadu Buhari, Thursday said “some people” are amplifying insecurity in the country just to spoil the achievements of his principal.

Mr Adesina on Thursday made this statement in an article in which he lampooned former Anambra governor Peter Obi for saying infrastructure cannot be used to drive economic growth.

Berating Mr Obi, Mr Adesina said “I think the successful businessman and former Governor (Mr Obi) got completely flummoxed, perplexed, bewildered and bemused, all in the process of trying to run down the Muhammadu Buhari administration, which has been doing great things in infrastructural development in the past six years.”

He further said that Nigeria is at the “threshold of reaping the benefits of the Buhari regime’s huge investment in infrastructure, but some people want to play up insecurity to “vitiate the achievements” of Mr Buhari regime.

“Now, we are at the threshold of reaping the benefits. Yet, some people want to downplay infrastructure, and play up insecurity, all in an attempt to vitiate the achievements of the Buhari administration. Will they succeed? Never!,” Mr Adesina said.

But, contrary to Mr Adesina’s claims, bandits have continued to kill and kidnap for ransom across Niger, Katsina, Kaduna, Kebbi and Zamfara State, forcing school closure as they target schoolchildren.

Over 100 students who were kidnapped in Tegina Niger State in May are still in bondage, over 70 days after they were abducted, while in July, a Nigerian Air Force jet was bombed by bandits in Zamfara State.

Last week, governor Aminu Masari of Katsina, Mr Buhari’s home state, cried out over increased insecurity in the state, saying 10 out 34 local governments in his state have been taken over by armed bandits.

“10 out of 34 Local Governments in Katsina State are under severe bandits attacks daily. So, with that in mind, there is no way we can sleep,” Mr Masari said while receiving Nigerian Chief of Army Staff, Yahaya Farouk, at Government House, Katsina.