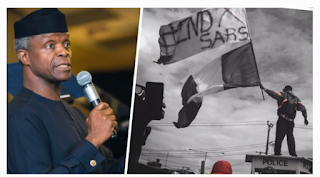 The National Economic Council (NEC) will discuss reports of judicial panels on police brutality and the defunct police unit, Special Anti-Robbery Squad (SARS) at its next meeting.

Laolu Akande, the spokesman for Vice President Yemi Osinbajo, who heads NEC, shared the news via a statement on Thursday in Abuja

He said all 28 states that established Judicial Panels on #EndSARS have completed their assignments, except Lagos State’s panel which will be ready by October.

At the virtual meeting of NEC, presided over by Mr Osinbajo on Thursday, eight states turned in their reports, according to the statement.

Submissions from other states are expected by the next meeting, the spokesman said.

Young Nigerians in October 2020 staged days of historic nationwide demonstrations to demand for an end to decades of police brutality and human rights abuses.

The #EndSARS protests forced the government to scrap the notorious units and hurriedly put up promises to address the demands of the youths.

NEC, in the wake of the protests, directed states to constitute Judicial Panels of Inquiry to investigate complaints against the Special Anti-Robbery Squads (SARS) and other police units.

Meanwhile, Maryam Uwais, Special Adviser to the President on Social Investment, made a presentation to NEC on At-Risk Children (& Youth) Programme.

The memo was to acquaint the council with the mission of the programme.

She said the programme was to ensure the integration of at-risk children and young adults by creating opportunities for skills and empowerment to reduce their vulnerabilities.

The council also received a memo from Professor Mohammed Haruna, the Chief Executive of the National Agency for Science and Engineering Infrastructure (NASENI).

Following President Muhamadu Buhari’s approval of the implementation of remittance of one per cent of the federation account as contained in the establishment Act as NASENI Statutory fund, NEC also endorsed.

The council also received the Progress Report of the NEC Adhoc Committee Interfacing with the Presidential Task Force (PTF) on COVID-19.

Governor Babajide Sanwo-Olu of Lagos State, on behalf of the Governor Ifeanyi Okowa of Delta, informed the council about the new vaccination drive which moved on further to seven states by August 25.

“By the end of September, the federal government will get a reasonable amount of vaccine doses.

“The adhoc committee interfacing with the presidential task force (PTF) on COVID-19 is to work hand in hand with the staff of National Primary Health Care in administering the vaccine.

“In Lagos, the number of Covid-19 cases rose last week; as at yesterday, the positivity rate rose from 10 to 10.5 per cent.

“States should ensure that mandatory isolation is observed; there is an increase in the usage of oxygen,’’ Mr Sanwo-Olu said.

He said that the Delta variant had remained the dominant variant in the country recently and was present in eight states.