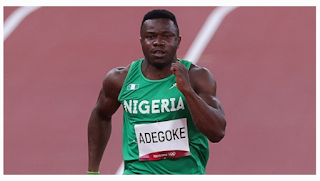 The tracks star clocked an impressive 10:00s in heat 2 of the men’s semifinal race. He had earlier returned a time of 9.98s at the quarter finals.

With the results, the athlete is in line to succeeding Usain Bolt as the fastest man in the world after taking Nigeria to the 100m finals for the first time in 25 years after Davidson Ezenwa in Atlanta ’96.

Adegoke is set to compete the finals alongside Su Bingtian of China, Ronnie Baker of the United States, Marcella Jacobs of Italy and Zharnel Hughes of Great Britain.