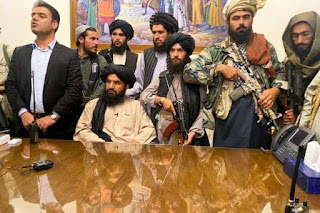 The first people to be evacuated from Afghanistan were not the poor, it was the President and his cronies. So, keep on supporting Buhari and APC because of tribe and religion. If they destroy Nigeria, they will be evacuated to London and leave you here to suffer.

Already, Tinubu is in London, while Buhari just returned from the UK. Their children all schooled abroad. Their wives shop abroad. The only thing they do in Nigeria is suck her dry in the guise of leading her. Look at how they killed unarmed peaceful youths to protect Tinubu’s economic interests during the #LekkiMassacre of #EndSARS protesters.

Already, that hypocrite, Lamido Sanusi, has admitted that Nigeria made her best economic improvement in 2014, under Jonathan, but all that economic growth has been wiped out in the last 6 years of Buhari.

Although he failed to say how he contributed to Buhari’s rise with his lies that $49 billion was missing from the Federation Account. All of that was a deliberate lie to undermine Jonathan. I just hope Sanusi is fulfilled now.

75000 Taliban soldiers defeated 300000 Afghan government troops. A 4 to 1 disadvantage. How did it happen? Many lessons for Nigeria. Soldiers who believe they fight for God eventually defeat soldiers that fight for salary. Yet, we continue to spend billions rehabilitating so called repentant Boko Haram. There is absolutely no discernible difference between the ideology Taliban and Boko Haram.

May Boko Haram not achieve same in Nigeria. May what befell Afghanistan not befall Nigeria