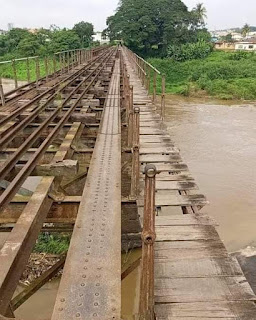 The first railway line was constructed from Lagos to Abeokuta in 1890s! which was later extended to Ibadan in the coming years.

This picture is relics of the railway line which terminated at now Panseke area. In the Colonial era, railway stations are usually opposite Post office, Panseke Post office gives it away- for Railway station was located there.

The above bridge is the popular Gada 'Bridge' Aro, which became disused after the Station was moved to Lafenwa.

The Present Federal ministry of Works Engineering school/OGROMA yards/VIO office were all workshops for railway workers, you will also note that Nigerian Custom office was and still located at the axis..

It was learnt that the Station was moved to Lafenwa which allowed expansion to Ibadan and later to Kano.

It's of note for residents of Abeokuta to know that the Old Abeokuta Railway Station was moved from Panseke/Ibara to Present day Lafenwa.

The above picture lead to the former railway station at Panseke which was constructed over 100years ago.