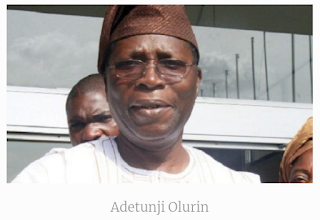 Details surrounding his death remain sketchy but his brother, Funso Olurin, speaking in Abeokuta on Saturday, said he died after a brief illness, Punch reported.

Mr Olurin was the Commander, 1st Mechanised Brigade of the Nigerian Army. In 1990, He became the General Officer Commanding the 3rd Armoured Division in Jos and a member of the Armed Forces Ruling Council.

He set up machinery for the establishment of Ladoke Akintola University during his time as Military administrator of old Oyo State.

In 2011, the Ilaro born officer ran for Ogun State governorship under the Peoples Democratic Party with massive support from former President.