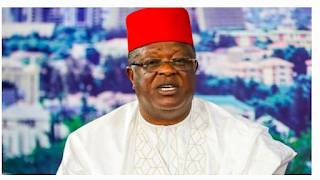 In a speech at the event, Mr Umahi said the bridges, which would take nine months to complete, would be named after Michael Okoro, the retiring Catholic bishop of Abakaliki Diocese, to “immortalise” him, in recognition of “his outstanding contributions to the development of the state.”

The governor described the bishop as “a symbol of love, peace, unity and what Christianity should be.”

“My Lord, I have never seen anybody complaining against you secretly or openly. It is a major feat to attain, and so, we want to thank you for the service you have given to our state,” said the governor. “A lot of people have consulted you over a lot of issues, and you have quietly resolved them through Fr. Abraham Nwali, the Special Adviser on Religious Matters.”

On naming the bridges after the cleric, Mr Umahi explained, “We will name two flyovers after you: this one here and the one we are going to build around the timber shed. There is a spot taking lives there. We need to save lives, and we are going to do it. Don’t ask how the money will come. It will come the moment it bears Bishop Nnachi Okoro.”

According to the governor, each of the bridges will cover 500 meters and cost N1.2 billion and N1.4.billion, respectively.

“I have always maintained that the cost of building projects in Nigeria is the highest all over the world, and for a country that behaves like that, it is difficult to develop in terms of infrastructure,” explained Mr Umahi. “We have to look inwards at the cost of our projects. Flyover is all about cement, chippings, sand, and labour. I don’t know why we call multibillions to build a single flyover.”