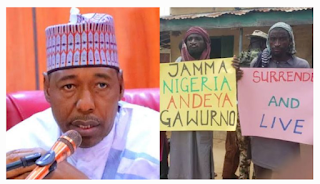 Governor Babagana Zulum of Borno has held a meeting with security agencies and other stakeholders to discuss the fate of about 3,000 Boko Haram terrorists who have surrendered.

Speaking at the meeting in Maiduguri, Mr Zulum said the forum was to reach common ground by the people of Borno on how to handle the situation for lasting peace.

Mr Zulum said about 3,000 Boko Haram terrorists had surrendered, and about 900 surrendered to the Cameroonian government.

He explained that he had constituted a team comprising security agencies and other relevant organisations to profile the surrendered terrorists according to international best practices.

The governor observed that over 200 farmers with their families held hostage by the insurgents were among the surrendered.

“They (insurgents) forced such farmers to farm while they buy the produce from them at a subsidised rate. There are also underage children and others conscripted by the insurgents,” Mr Zulum explained.

The Theatre Commander of ‘Operation Hadin Kai’, Maj.-Gen. Christopher Musa, lauded the development, assuring that the military will continue to use the “kinetic and non-kinetic” approach in prosecuting the fight against insurgency.

Mr Musa said, “If we get it right here, others will take a cue from us.”

Also, speaking on behalf of the National Assembly members from Borno, Ali Ndume, and Tahir Monguno, lauded the development.

They noted a United Nations law bordering those that surrendered in a conflict that would be observed and called on the federal government to assist Borno, particularly in funding the process of rehabilitation, reconstruction, and resettlement of victims.

Others present at the peace parley included the Shehu of Borno, Abubakar Umar-Garbai, representatives of Muslims, Christian Association of Nigeria (CAN), organised labour, NBA, NUJ, CSOs, and women groups.