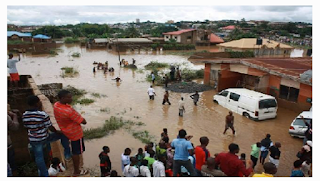 Heavy rainfall and thunderstorms that may result in flooding, traffic challenges and poor flight visibility have been predicted in some parts of the country over the next three days.

The Nigerian Meteorological Agency (NiMet) spokesman, Ibrahim Muntari, issued the warning in a statement in Lagos on Friday.

Mr Muntari explained that a three-day forecast released by the Central Forecast Office (CFO), observed that thunderstorms were expected over parts of Sokoto, Zamfara, Kebbi, Adamawa, Taraba, Bauchi and Kaduna.

According to him, other places are: Jigawa, Gombe, Kano and Yobe states. He said parts of Niger, FCT and Nasarawa also had prospects of thunderstorms and intermittent rains.

The spokesperson further noted that there were chances of moderate to heavy rainfall in parts of Benue, Bauchi, Plateau, Southern Borno, Gombe and Southern Yobe.

Mr Muntari added that cloudy conditions and light rains were expected over the rest of the country.

As a result of the expected heavy rainfall and soil moisture, he said there were chances of flooding of roads, low lying settlements, stream and river channels, and disruption of traffic.

“Other effects are reduction in flight visibility, possible delay in flight operations, damage to mud houses and makeshift structures, possible damage to roads and bridges,” he said.

Mr Muntari said the agency, therefore, advised the public to exercise restraint and wait till after the rains to commute.

He assured that NiMet would continue to monitor and update on any changes in the weather pattern.