History of Abeokuta, the capital city of Ogun State. - The Naija Weekly

History of Abeokuta, the capital city of Ogun State. 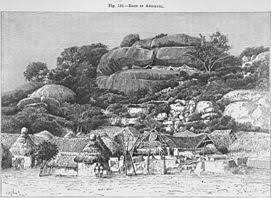 ABEOKUTA WAS FOUNDED in 1830 after the intertribal wars ravaged refugees in Egba forest from their original homes between 1817 and 1830. The name of the town "ABEOKUTA" was derived from the protection which the fleeing settlers sought under the Olumo Rock, now a tourist center in the town. Abeokuta means 'the refugees under a rock', signifying the protection which the Olumo Rock offered the refugees from possible attacks. The first and major of these series of internecine wars was the one which broke out as a result of an incident at Apomu Market, now in the Irewolede Local Government area of Osun State. In 1821, an Owu man who sold alligator peppers was at Apomu Market selling his wares. He laid them out in piles containing 200 peppers each. An Ijebu woman came to the market and purchased a pile. She did not verify on the spot the correctness of the number of peppers in the pile she selected, but found it convenient to do counting on reaching home. She claimed to find only 199, which meant that one was missing.

The Ijebu woman went back to the market to accost the Owu man over the one pepper by which the portion she selected was less, and demanded restitution of the missing one. But the Owu man objected, maintaining that he was sure of his own count. The argument over this single pepper developed into an open quarrell between the two of them. Later, it blew out into a fracas in which people of Owu and Ijebu clans in the market took sides with their kith and kin. Sectional sentiments soon became whipped up into open confrontation in which a life was lost and several people were injured.

Each side went home to narrate to their Oba, chiefs and townsmen the events of the day. As would be expected, each group took umbrage over what it considered to be a raw deal from the opposing camp. Within a matter of days, the fight over a single alligator pepper had resulted into a total war in which the Owu and Ijebu peoples threw caution to the winds and restored to open arms. Before this incident, the people of Ife had suffered defeats in the hands of the Owu people, and the Ijebu had similarly been routed by the Owu in a war fought over the slave trading.

Now, both the Ife and Ijebu saw the opportunity to settle scores with the Owu by joining forces to face the Owu. Even the remnants of the Oyo forces, just returned from their mission to repel a Fulani invasion, and who were by then mere lay-about, teamed up with Ife and Ijebu forces. The combined attack of the Ife-Ijebu-Oyo coalition forced the Owu homeland to fall after a long siege, and the events following this catastrophe gave birth to the founding of Abeokuta a few years after.

The fall of the Owu homeland was quickly followed by the fall of some other Egba towns, each being sacked in succession by the alliance of the Ife-Ijebu-Oyo forces.

The Egba towns which had folded their arms while the Owu people fought alone, now became victims of the ravening wolves represented by these rallies. The only pity of it was that among the first to fall was Ikija. Ikija was attacked because its people stood by the Owu people in the war of 'Alligator Pepper'. Before long, many Egba towns also fell and all the survivors eventually sought refuge in Abeokuta after a few years, and thus made Abeokuta their permanent place of sojourn.

Their decision to leave Ibadan for Abeokuta was nowever informed by the hostility of the Oyo, Ife and Ijebu, with whom they shared sojourn in Ibadan. Lamodi, a warrior of note, was credited with the initiative for the migration to Abeokuta, although he himself never saw the Promised Land because he died on the way. He was at the time the Balogun of the Egba people. Sodeke, who was then the Seriki of the Egba, took over and led the first wave of immigration to Abeokuta in 1830. Bringing up the rear of the migrants to Abeokuta were the Owu people in about the year 1834. Some others also came later.

The site they choose for Abeokuta was originally the farmland of an Itoko farmer whose name was Adagba. Adagba had no choice but to receive the Egba refugees with both hands and the credit he got was that Abeokuta became known by another name - 'OKO ADAGBA', meaning Adagba's Farmstead. On setting in Abeokuta, each community continued its main occupation of farming, cultivating mainly food crops and cash crops, notably cotton, palm-trees, and kola-nuts. A few did pretty trading and some practiced itinerant merchandising. There were also craftsmen, hunters, drummers, weavers and dryers; some practiced traditional healing, mingling it with some form of divination. They were very religious and each adhered to a belief in one God or another. They specialized in a genre of oral traditional poetry known as Ege which is both musical and philosophical in content and forms.

The first few years immediately following the settling in Abeokuta were fraught with difficulties - social, political and economic. But for the fact that they lived simple lives, they would have found the problems overwhelming. The problems of each group findings and selecting appropriate land to farm was enough to daunt them. And the quick succession of the waves of settlers posed problems with extra dimensions. The new pottage represented by the many group of settlers needed time to simmer and mellow down to attain acceptable taste. Then there were the need for food supply. Being new settlers, they needed a year or two to be able to plant enough food to feed themselves. So it was largely a question of scrounging for food on in the first two years by a people who had escaped from unsettling ravages of war.

Between 1830 and the turn of the century, the settlers in Abeokuta were forced into fighting several wars. In these wars, they creditably proved their mettle. In 1832, the Ijebu Remo people provoked the new settlers into taking arms against several Ijebu Remo towns in a war called - Owiwi war. In 1834, the Ibadan people also challenged them to a war which resulted in the defeat of the Ibadan army in what was known as the Battle of Arakanga.

In 1842, the settlers took the initiative of a war with the Ota people in order to ensure free movement through Ota territory each time they needed to get to Lagos to buy firearms. This led to another war in 1844 when they attacked Ado for assisting the Ota people two years before. The same year, the Dahomeans, under King Gezo, waged war against Abeokuta but were repulsed. The Dahomey army repeated the invasion in 1851 and suffered a similar defeat.

In 1849, Abeokuta attacked Ibarapa for waylaying the Egba in their territory. Among other wars fought by Abeokuta were the Ijebu-Ere War in 1851, and the Ijaye War of 1860-1862, and the Makun War of 1862-1864, as well as a few others. In most of these encounters, they emerged victorious - although they suffered their own reverses in some as well. Among Egba war leaders were Sodeke, Ogunbona, Apati, Seriki Akoodu, Ogundipe Alatise, Sokenu, Basorun Somoye, Olufakun, Agbo, Lumloye, Iyalode Tinubu, Majekodunmi, and a host of others.

No organization can exist without a mission. The Egba Progressive Association holds true to the goals we have set.