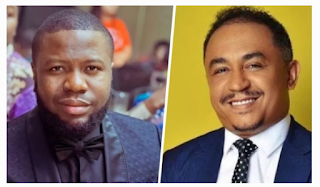 Daddy Freeze, a critic of tithing according to the Christian faith, came under attack for his relationship with Hushpuppi after the Federal Bureau of Investigation (FBI) indictment of suspended police chief Abba Kyari in multimillion-dollar fraud with Hushpuppi.

Reacting to his critics in an Instagram video on Saturday, Daddy Freeze said the Internet fraudster Hushpuppi loved him when Christians abandoned him in his time of need.

“The church abandoned me in my difficult situation. The love that people like Huspuppi have shown me, if I had gotten it from a church if the church stood by me at my trying times, would I have answered Hushpuppi when he said there was a cab to come to take me to where he was?”

Daddy Freeze further said Christian Gospel artists and pastors boycotted events because of him, adding that some pastors called his employer to sack him just because he questioned their doctrines.

“Pastors were calling their guys in media agencies and pulling their jobs from my hands, calling radio stations that I’m working with to sack me. At this same time, Hushpuppi is sending car to me to host me. Who to me is devil? Church or Hushpuppi? You do the maths,” Daddy Freeze added.

Unfolding revelations on the involvement of Abba Kyari with Hushpuppi has prodded Nigerians to question the relationship between Hushpuppi and the likes of Daddy Freeze and others seen with Hushpuppi before his arrest.