IBB writes Tinubu, Atiku off ahead of 2023 presidential election - The Naija Weekly

IBB writes Tinubu, Atiku off ahead of 2023 presidential election 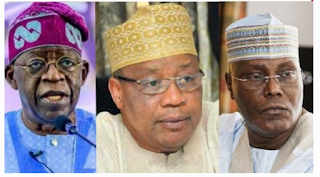 “I have started visualising a good Nigerian leader,” Mr Babangida announced during an interview with ARISE TV aired on Friday.

He added, “I have seen one, or two or three of such persons already in his sixties. I believe so if we can get him.”

Mr Babangida further listed qualities of the potential president, including being well-travelled, tolerant, and friendly to every part of the country.

The former military head of state is infamous for legitimising corruption and deepening impunity in Africa’s most populous nation.

Regardless of that characterisation, Mr Babangida espoused his idea of the right person to rule the country come 2023.

“That is a person who travels across the country and has a friend virtually everywhere he travels to,” he noted. “He knows at least one person that he can communicate with. That is a person who is very versed in economics and is also a good politician, who should be able to talk to Nigerians and so on.”

Messrs Atiku and Tinubu have vast connections across the country’s 36 states and the FCT. While Mr Atiku has made his ambition to be president of Nigeria public, Mr Tinubu has been evasive about his presidential interest ahead of the 2023 election.

The former dictator’s call for a younger president came amidst criticisms that President Muhammadu Buhari’s regime is riddled with nepotism, impunity, poverty, and insecurity as never seen before in the country.

In his 70s, Mr Buhari, an ex-military dictator, has been battling poor health, spending several weeks at a London hospital. He has continued to frequent the UK for medical treatment.

Mr Buhari’s lethargic response to critical issues plaguing the country has further fuelled the call for a younger leader.