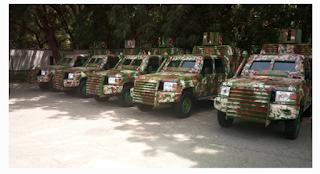 Kebbi deputy governor Sama’ila Yombe-Dabai, has led a team of fabricators to reinforce vehicles purchased for the military, turning them into Armoured Personnel Carriers (APC) to support the security agencies fight against banditry in the state.

Narrating their effort, Mr Yombe-Dabai said he asked the governor, Abubakar Atiku Bagudu, for permission to convert vehicles the state government was donating to the military, and turn them into “sophisticated militarily” vehicles able to carry weapons.

The deputy governor, a retired military officer, said Mr Bagudu gave his blessings. The original vehicles were then reinforced by the fabricators with hardened steel and made suitable for battle with provisions for a driver, a gunner and space for extra troops.

Mr Yombe-Dabai said what they did was to build the vehicles to be able to carry military hardware for the driver, for those inside and those at the back of the vehicle by putting on armoured material with the weight of the vehicle.

“We have a Toyota Land cruiser behind me, one of the vehicles that we bought, and it has limited weight such that if we were to put all armoured gadgets, it would not be able to carry out combat missions, with the engine.

“So, we provided shields for the engine, the driver and soldiers at the back.

“We have five vehicles we have done and we are going to do another set of five. These ones are going to be faster because we have already set up the template for the construction required to reassemble the vehicles,” the deputy governor said.

The fabricated Armoured Personnel Carriers were painted camouflage, in the colours of the Army.