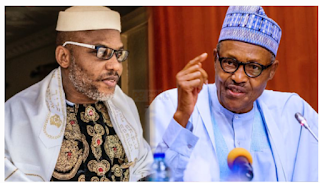 Court filings obtained by Peoples Gazette contained a laundry of gruesome human rights violations and genocidal charges against Mr Buhari and disgraced police commissioner Abba Kyari, with IPOB’s Washington lawyer Bruce Fein raising alarm that 70 million Igbo Christians of Nigeria’s South-East are at risk of being massacred and subjugated by Messrs Buhari and Kyari and their genocidal Muslim Fulani collaborators.

“President Buhari’s intends to use the Super Tucano advanced weapons to kill and maim Biafrans and destroy their property in his ongoing genocide conducted by Fulani controlled security forces guilty of atrocious human rights violations,” IPOB said in the July 31, 2021, complaint filed at the U.S. District Court for the District of Columbia.

Secretary of State Anthony Blinken and Secretary of Defense Lloyd Austin were listed as defendants in the suit, which did not appear to have been assigned a judge as of the time of filing this report.

Mr Buhari had ordered 12 A-29 Super Tucano fighter jets to tackle the ongoing war against Boko Haram. Six of the planes were delivered in July 2021 and six more still being expected in a deal of about $600 million approved by former President Donald Trump. Mr Kyari was disgraced out of office last weekend after his indictment on wire fraud and money laundering charges by a grand jury based on a cross-border investigation spearheaded by the Federal Bureau of Investigation (FBI).

But IPOB’s lawyers argued that the sale violated the 2008 Leahy Amendment that prohibits the sale of weapons to countries with poor human rights records.

The Buhari regime has become notorious for its brutal, divisive, and corrupt culture, all of which IPOB said Mr Trump ignored because he was only interested in boosting the U.S. economy with the sale rather than ostracising the Nigerian regime for its atrocities.

“At present, President Buhari is conducting a genocide of Biafrans that is under investigation by the International Criminal Court through use of his Fulani controlled security forces, including the Nigerian Air Force,” the complaint said. Nnamdi Kanu’s abduction and repatriation to Nigeria from Kenya in June 2020 was also cited in the court documents as a competent demonstration of Mr Buhari’s brutish leadership.

The lawyers detailed several extra-judicial killings and illegal arrests carried out by Mr Kyari and his team in the South-East in recent months and listed 10 IPOB members across the region who would testify as to the danger of Super Tucano sale to the Nigerian Air Force under Mr Buhari.

The Nigerian Air Force told The Gazette it had ‘no comment’. A spokesman for Mr Buhari did not immediately return The Gazette’s requests for comments about the court filings.