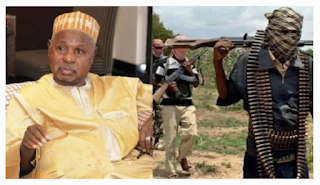 Amidst worsening insecurity in the country, Governor Aminu Bello-Masari of Katsina has told Nigerians to see the fight against Boko Haram insurgents and bandits as their responsibility.

He called on Nigerians to ensure national unity and security despite the country’s security challenges, assuring the people that the problems will soon be over.

The governor urged the Nigerians to stand in unity against insurgents and bandits, noting that great nations around the world had at one time or the other faced what Nigerians are experiencing and emerged stronger politically and economically.

“What Nigeria is going through is a transitional stage ahead of development, and it shall become a history,” Mr Masari reasoned. “I want all Nigerians to know that security is a responsibility of everyone, be it politicians, traditional rulers, religious leaders, and youths. We need to unite against this scourge of insecurity.”

The governor stated this in Katsina when he received the management of the News Agency of Nigeria led by its Managing Director, Buki Ponle.

He added that the federal government’s ongoing efforts to tackle most of the challenges required collective support of Nigerians.

Some weeks ago, Mr Masari had made a similar comment that Nigerians should shoulder the responsibility of fighting the criminals.

“It is important for you to fight your enemy, even with your teeth bite him. Where are the warriors? I don’t understand our people these days. What they should be doing is not what they are doing,” said the governor in July.

The governor thanked President Muhammadu Buhari for approving the renaming of NAN’s headquarters building after its pioneer editor-in-chief Wada Maida, describing it as “an honour well deserved to a man who gave his best to Nigeria and journalism.”

He also described Mr Maida’s death as a personal loss, stating that he was his childhood friend and political associate.

“I have been close to Malam Wada Maida right from when he started from the Federal Ministry of Information till he later joined NAN,” said Mr Masari. “He was also the chairman of my youth empowerment foundation, where we gave scholarships to several youths, and he did very well. I recall after we came into government in 2015, he never came for personal favours or contracts.”

The governor added, “Except only once when he requested that we should construct drainage of over one kilometre for the people of a particular area in the state capital to solve their flooding challenge.”