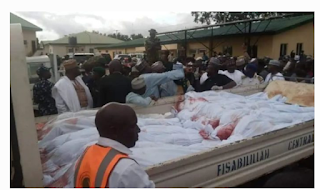 The All Progressives Congress (APC) in Plateau has urged Nigerians to continue to support the government and security agencies to end killings in the state.

Enoch Fanmak, APC acting chairman in Plateau, made the call on Sunday in Jos when he briefed journalists on the state of insecurity.

Mr Fanmak said, “We call on our citizens to continue to support the government and security agencies as well as community and traditional leaders to restore normalcy within the affected areas quickly.”

He urged the government and security agencies to bring to book those responsible for the latest violence in Plateau.

“We must avoid the divisive tactics employed by enemies of the state to use religion, ethnicity, and politics to jeopardise the peace in the state. The APC believes that this is the time to come together as well-meaning citizens of Plateau to shame this group of people bent on making Plateau a hotbed of crises,” added Mr Fanmak.

The APC chieftain asked the National Assembly to amend the constitution to provide for state police, giving governors direct responsibility to “bark and bite.”

“We commend the efforts of the security agencies in the state for containing the situation and doing their best to maintain law and order,” Mr Fanmak further noted. “We urge them to go further and arrest all the perpetrators of all the killings across the affected local government areas and ensure that they are prosecuted expeditiously.”

He insisted none of the perpetrators of violence in the state should be spared.