Kabul Explosion: Biden vows to hunt down those responsible for attack - The Naija Weekly

Home Foreign Kabul Explosion: Biden vows to hunt down those responsible for attack

Kabul Explosion: Biden vows to hunt down those responsible for attack 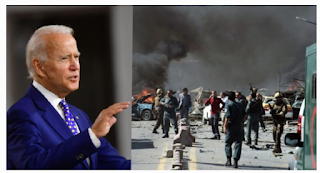 U.S. President Joe Biden has pledged to hunt down those responsible for the terrorist attack on the Hamid Karzai International Airport, Kabul that killed at least a dozen American service members and injured 15 others.

Mr Biden who spoke from the White House on Thursday said the attack will not stop the frantic evacuation of U.S. citizens from the war-thorn Asian country.

He warned that the U.S. will respond to the attackers with force of precision in due time.

“To those who carried out this attack, as well as anyone who wishes America harm, know this: We will not forgive,” the New York Times quoted president to have said. “We will not forget. We will hunt you down and make you pay.”

“We will respond with force of precision at our time, place, we choose in a moment of our choosing,” he added.

The U.S. president further disclosed that he had mandated his commanders to find ways to target ISIS-K, the Afghan affiliate of the Islamic State that earlier claimed responsibility for the attacks.

Officials said, amidst claims that several others might have been killed or injured in the same attacks.

“We can confirm an explosion outside Kabul airport. Casualties are unclear at this time,” U.S. Defense spokesman John Kirby said in a statement on Twitter. “We will provide additional details when we can.”

A suicide bomber reportedly detonated explosives at the airport in Kabul where the U.S. military personnel were injured. Another explosion was heard at Baron Hotel in Kabul, Fox News reported citing officials.

It was unclear how many people were injured in total. No immediate fatalities were reported, but several media outlets said the intensity of the airport bombing might have killed some travellers.

The attack came barely hours after the British intelligence warned of a credible threat of attack at the airport, which has seen an unprecedented upsurge in travellers as foreigners and Afghans scamper to leave the country in the wake of Taliban takeover.