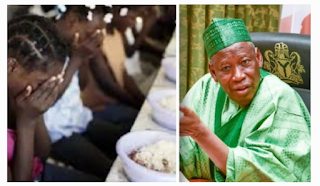 Human trafficking is widespread in Kano, says the National Agency for the Prohibition of Trafficking in Persons (NAPTIP), as Governor Abdullahi Ganduje pledged to support the agency.

This is contained in a statement signed by NAPTIP spokesman Vincent Adekoye on Tuesday.

NAPTIP’s director-general Basheet Mohammed disclosed that human trafficking was endemic in Kano based on the number of victims rescued, arrest, and prosecution of offenders.

“Organs like eyes, kidneys, and lungs are harvested to service the medical needs of Europe. From inception to date, NAPTIP has rescued a total of 16,277 victims of human trafficking,” said the NAPTIP boss.

”NAPTIP vulnerability index analysis showed that human trafficking is endemic in Kano. In the same vein, out of 482 convicted persons by the agency from inception, 110 are from Kano zonal command of NAPTIP, representing the highest in the country,” Mr Mohammed explained. “NAPTIP is worried about this ugly trend of trafficking young Nigerian women to the Middle East, who are mostly from Kano and neighbouring states. In the last 10 days, NAPTIP has successfully rescued 104 victims.”

He added that the 12 Kano indigenes had been rehabilitated and reunited with their families.

Ahead of the inauguration of the state’s task force against trafficking, Mr Ganduje stated that human trafficking was endemic in Kano due to its status as an emerging business hub, coupled with other developments like road, rail lines, and others.

“We welcome the idea of the state task force on human trafficking. We shall partner with your agency, and the task force will be given the desired support,” Mr Ganduje stated. “The previous management of NAPTIP had narrowed their approach to issues of human trafficking alone. It is commendable you have identified other societal problems and are ready to tackle them.”

The governor also lauded the NAPTIP boss for his zeal, commitment, and innovation in the agency, which he said had led to the ongoing repositioning and hinting the state the mandate of the agency.