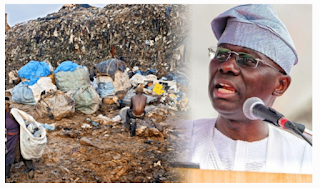 Governor Babajide of Lagos says his administration spent over N2 billion to rehabilitate dumpsites across the state for effective waste management.

Mr Sanwo-Olu stated this during the unveiling of 102 new compactor trucks and 100 double dino bins at Lagos House, Ikeja.

”On assumption of office two years ago, one of the first things I did was visit the Olusosun landfill in Ojota. This visit was not accidental,” said the governor. “We were and still remain determined to rewrite the narrative of waste management in Lagos state for the better. This determination has seen us already invest more than N2 billion towards the rehabilitation of dumpsites across our state.”

He added that ”another N1 billion is currently being invested” in constructing three new transfer loading stations to provide infrastructure to facilitate the delivery of solid waste management services.

According to him, the government will empower the Lagos State Waste Management Authority (LAWMA) to drive the elimination of waste accumulation in Lagos and the adoption of recycling state-wide.

Mr Babajide added that the state would also focus on changing residents’ mindsets regarding the management of waste.

”We are also fully aware of the potential of the waste economy. Our waste-to-wealth plan is taking shape, as we are rehabilitating the compost facility in Odogunyan, Ikorodu, and will be unveiling more projects/programmes in the coming months,” said the governor.

The governor charged the residents to take responsibility for the waste they generate and avoid littering private and public places.

”It has been said that one definition of insanity is doing the same thing and yet expecting a different result. We cannot be irresponsible in our waste handling and disposal behaviour and somehow expect that we will be spared the consequences of irresponsibility,” Mr Sanwo-Olu added. ”As we are all aware, there is renewed emphasis and global focus on the threat of Climate Change.”