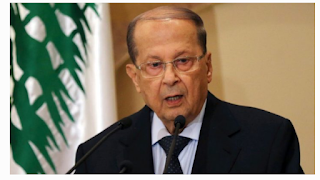 President Aoun’s remarks came at a meeting he held with the newly appointed representative of the Red Cross in Lebanon, Simone Ashelman.

Mr Aoun told Mrs Ashelman about the various crises prevailing in Lebanon, which were exacerbated by the presence of a large number of displaced Syrians in the country.

He also thanked the IRC for its big support following the Beirut port explosions on August 4, 2020, and the recent fuel tank explosion in the country’s Akkar district.

Meanwhile, Mrs Ashelman emphasised “the mission’s readiness to cooperate with Lebanon by supporting the country in humanitarian and health fields.’’