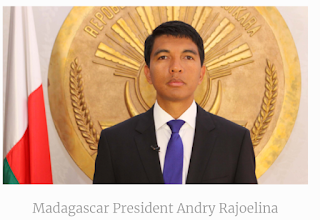 Madagascar President Andry Rajoelina has sacked all his ministers, his office said.

The sacking of the ministers came days after he criticised some of their performances, saying they were below par, and weeks after officials said they had thwarted a plot to kill the former coup leader.

Mr Rajoelina’s office gave no reason for the dismissals in a statement issued late on Wednesday.

On Sunday, Mr Rajoelina said the performance of some ministers was unsatisfactory. “Like in a football team, you have to change when there are failures in government,” he reasoned on national TV. “There will be a change, and this concerns those who do not carry out the work entrusted to them.”

Last week, a senior prosecutor said Madagascar had arrested 21 more suspects, including 12 military personnel, in connection with a plot to kill Rajoelina and topple the government.

Six people, including a French citizen, were arrested last month on suspicion of involvement in the plot after what officials said was a months-long investigation in the Indian Ocean island.

Madagascar, an impoverished former French colony of 26 million, has a history of political violence and instability. Mr Rajoelina, 44, was sworn in as president in 2019 after a hotly contested election and a constitutional court challenge from his rival.

He first took power in a March 2009 coup, unseating Marc Ravalomanana. He remained in control at the head of a transitional government until 2014.

In the 2019 elections, Ravalomanana challenged Rajoelina, lost, and said the vote was fraudulent.