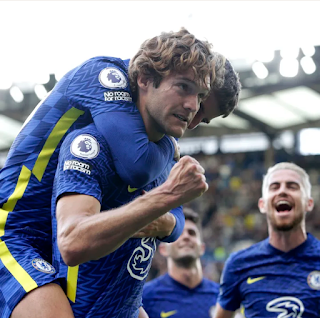 Chelsea’s season started in style at a sun-drenched Stamford Bridge with a clean sheet, three goals and three Premier League points on the board on the opening weekend.

Crystal Palace were put to the sword by Thomas Tuchel’s reigning kings of Europe, with Marcos Alonso, Christian Pulisic and Trevoh Chalobah on the scoresheet in the first game in front of a capacity home crowd in south-west London since March 2020.

Alonso broke the deadlock inside half an hour with a customary bending free-kick into the top corner, while Pulisic doubled the advantage before half-time by pouncing on a spilled goalkeeper parry in the box.

With the Blues in control, Chalobah added icing to the cake by drilling in his maiden Chelsea goal from distance. All in all, a perfect day back down the Fulham Road! 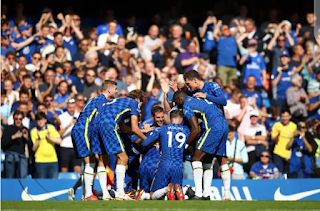 Cesar Azpilicueta, Andreas Christensen, Jorginho, Mason Mount and Pulisic were the returning quintet, with N’Golo Kante and Hakim Ziyech absent through injury. Chalobah continued at the back, making his Premier League debut.

This was football how it should be, with the sun shining and Stamford Bridge packed to the rafters with supporters full of hope on the opening day of a new season. However, prior to kick-off there was a moment to reflect on all the lives sadly lost to the pandemic.

The European champions began in the ascendancy, utilising the width of our 3-4-3 against Palace’s back four and making most gains down the flanks.

Skipper Azpilicueta had our first shot of the season early on, picking up a loose ball after Mount had found space in a familiar pocket down the inside-right channel, though the effort was far too high to trouble Vicente Guaita and landed in the once-again populated Shed End.

On the opposite wing, Alonso teed up Pulisic with a teasing delivery but the American’s stooping header flew over.

Mateo Kovacic was wearing his new number eight jersey and attempted to mark the switch with renewed attacking rigour. The Croatian took aim after 13 minutes but saw his shot deflected behind for a corner, starting a succession of set-pieces for the hosts that asked questions of Palace in their own 18-yard box.

Guaita had to be alert to punch away Mount’s dipping free-kick from the left but was unable to do much about a similar effort from Alonso on the other side, which ultimately saw the Blues strike the opener.

The England midfielder was upended on the edge of the area and Alonso stepped up, with his name being sung encouragingly from the home crowd. The 30-year-old did not disappoint those watching on with bated breath, bending the ball beautifully up and over the wall into the top corner.

The sight and sounds of a full Stamford Bridge celebrating a goal for the first time in 17 months was one to savour. 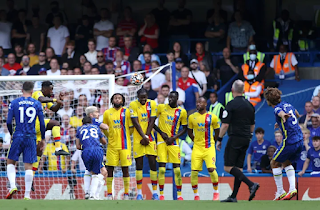 Palace have made a number of summer changes, with a new boss and several younger recruits among the ranks, with senior stars including Gary Cahill departing. Yet their transition remains in the early stages and they struggled to offer much forward thrust in the first period, with Chalobah repelling the few advances made into the Bluex box.

Down the other end, Chelsea were drawing more fouls in decent positions, with Mount firing into the wall as we pushed to make the most of our superiority.

Pulisic on the mark

The advantage was doubled moments before the break, with Mount the creative spark once again. Our number 19 exchanged a neat one-two with Azpilicueta before firing a dangerous low cross into the six-yard box.

Guaita parried but only into the direct path of Pulisic, who adjusted smartly to turn the ball in with a left-footed finish for his first goal since the Champions League semi-final in Madrid.

It might have been even better for Tuchel heading into his half-time address as Jorginho sprayed a lovely pass out left to Alonso, who drilled the ball into the feet of Werner. The German did well to make contact but could only hit the side-netting, leaving the Blues with a 2-0 lead at the interval.