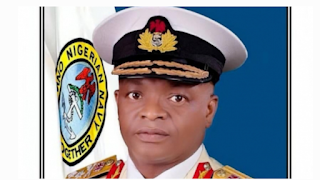 The Chief of Naval Staff, Awwal Gambo, has called on young Nigerians to use their education to plug the gaps in Nigeria’s national security.

Represented by Sanusi Ibrahim, the Flag Officer Commanding Eastern Naval Command, Mr Gambo said he was impressed by the student’s ideas and will “see a way to collaborate with research institutes and use them to cover up the gaps in national security.”

Ahmed stated that the students had the task of identifying two issues that were challenging to the nation and their solutions as they proffered insecurity and food security against the background of armed banditry and kidnapping nationwide.

“In terms of the solution to the insecurity that bedevils us as a nation, we saw the school that provided houses that have security gadgets, they proposed ships that can bring down anything that will pose a threat to our dear nation.

“We saw them providing robots, AUV vehicles, wherein security men can go and face these armed bandits without being present.

“They showcased drones, where radio could be used to gather information, to enhance and solve the issue of insecurity in our dear nation,” he stated.