New documentary on #EndSARS to premiere August 28 - The Naija Weekly 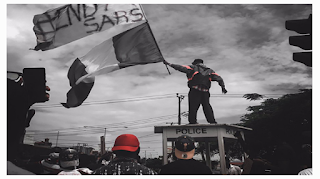 A new movie inspired by the dreaded events that culminated in the shooting of #EndSARS demonstrators on the night of October 20, 2020 at the Lekki toll plaza, Lagos, is set to premiere on August 28.

The new non-fiction film is titled “ENDSARS Documentary” seeks to revive debates about #EndSARS and the circumstances that birthed the historic movement, the producers of the movie said.

The film narrates the horrific escapades of the Nigeria Police Force and its defunct brutal department, Special Anti-Robbery Squad (SARS), that have been accused of decades of brutality and human rights abuses.

“The documentary is amplifying the conversation and revival of the debate about ENDSARS, and the surrounding factors that necessitated the movement which is still with us today, highlighting voices that inspire and drive positive democratic change in Nigeria.

“This is a fitting reminder of the power to make a change when we stand up for justice” a press release by the producers read in part.

According to the statement, the trailer to the documentary will be released on August 26 via all social media handles of global streaming platform Meroestream.

This would then be followed by the actual premiere on August 28, still on Meroestream.

The documentary was produced by award-winning journalist and film producer Seun Oloketuyi alongside an associate producer Rolake Adesina.