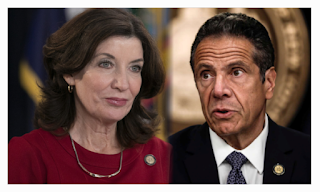 Kathy Hochul has been sworn in as the 57th governor of New York.

The first woman to serve in the role, Ms Hochul said her biggest priority would be to help restore New Yorkers’ confidence in state government, a barely veiled knock against disgraced former Governor Andrew Cuomo.

“I want people to believe in government again. It’s important to me that people have faith,” she stated. ”Our strength comes from the faith and the confidence of the people who put us in these offices, and I take that very seriously.’’

Ms Hochul also declared she would be focusing on changing the culture of Albany and pursuing a fresh collaborative approach. She laid out key priorities, including getting COVID-19 rental assistance to tenants, instituting a mask mandate for schoolkids, and taking over the reins of the pandemic recovery.

Ms Hochul disclosed that she had spoken with President Joe Biden on Monday evening, vowing to work collaboratively with legislative leaders and promised a new era of cooperation with Mayor Bill de Blasio, with whom Mr Cuomo feuded.

“There will be no blindsiding. We need cooperation,’’ said Ms Hochul said about working with leaders in the city.

Mr De Blasio could barely contain his joy as he heaped praise on the new governor. “It’s just a good day to be turning the page. She and I have already started speaking regularly, and we’re going to keep it that way and do a lot of good work for the people of this city and this state,’’ he said.

Chief Judge of the Court of Appeals Janet DiFiore presided over the swearing-in at the State Capitol hours after a similar official ceremony just after midnight when Mr Cuomo’s resignation amid sexual harassment allegations took effect.

In a nod to Ms Hochul’s groundbreaking role, DiFiore wore a gown once worn by Judith Kaye, the first woman to serve as chief judge in the state.

She promised to axe any Mr Cuomo’s staffers implicated in the damning report from the attorney general’s office that revealed the former governor sexually harassed 11 women and presided over a “toxic’’ workplace.

In a pre-taped farewell address aired on Monday, Mr Cuomo continued to paint the investigation into his behaviour as biased and cast the allegations against him as politically motivated.