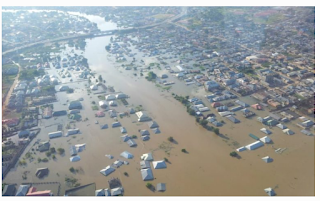 The Nigeria Meteorological Agency (NiMet) has predicted three days of flash flood across the country from Tuesday to Thursday.

NiMet, in a statement by its spokesman Muntari Ibrahim, warned of “slim chances” of flash floods across 34 states for three days.

According to the agency, moderate to heavy rainfall, leading to flash floods, was expected to start on Tuesday and continue until Thursday.

Consequently, NiMet advised that “slim chances of flash flood events on roads, settlements, farmlands, and bridges” could be more pronounced, and as a result, “there is an increased likelihood of cars skidding off the road and chances of car crashes.”

The agency also cautioned the public “to take heed and avoid damages” from rain-related hazards occasioned by the predicted flash flood.

It noted that the previous three-day forecast issued towards the end of July was 100 per cent accurate, “with disheartening tales of lives and property affected significantly.”