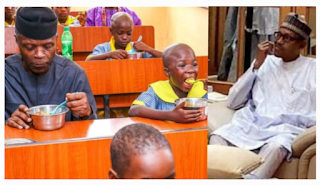 Mr Monguno said the president pledged to tackle the country’s widespread poverty at a security meeting attended by Mr Osinbajo, security chiefs, and some ministers in Abuja on Thursday.

“The last National Security Council meeting we had was on June 8. From that time till now, a lot has happened within the security domain. Mr President called for this meeting,” Mr Monguno explained. “It was actually supposed to be for next week, but he drew it back for today, for obvious reasons.”

While Mr Buhari’s regime has always claimed to have the country in a better economic situation than before, Mr Monguno admitted that “widespread hunger” exists, assuring Nigerians that Messrs Buhari and Osinbajo are on top of the hunger crisis.

“We also address the issue of the prevailing situation, which is widespread, you know, issues of hunger,” said the security adviser. “The president is not oblivious to the pains of the people and is working with the vice president, and other members of the council are going to employ the relevant ministries, departments, and agencies of government to address this issue.”

He described Nigeria’s widespread hunger as an “emergency.”

“As far as it’s concerned, it’s also an emergency situation that people should not be left to wallow in hunger and despair. This is something that he’s also going to look into,” added Mr Monguno. “He’s going to use all the necessary all the relevant tools at his disposal to address the issue of widespread hunger.”

As part of the regime’s efforts to stem the tide of poverty, Mr Buhari inaugurated a poverty committee last June, appointing Mr Osinbajo as the chairman.

A few days ago, Mr Buhari also launched the Multidimensional Poverty Index (MPI) Survey to measure the level of penury among Nigerians.