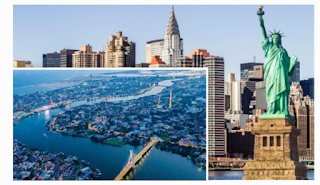 Eric Adams, the Democratic nominee for the mayor of New York City, has pledged to establish a sister city agreement between New York and Lagos to boost economic development if elected mayor in the forthcoming November election.

Mr Adams disclosed this at the ‘Meet and Greet Fundraiser for the 2021 New York City Mayoral Election’ organised by the Nigerian-American community in New York.

The Brooklyn Borough president said he went to Goree Island, Senegal, and established a sister city agreement between the Island and Brooklyn three years ago.

A sister city agreement signifies a long-term partnership between two communities in two countries that touches on cultural exchange, economic development, and other important areas.

Mr Adams also pledged to support African leaders by hosting them during the annual UN General Assembly at the UN headquarters in New York.

“When we will have the UN General Assembly, we are going to host all the African leaders that are coming into America,” he pledged. “They are going to be part of delegation and ceremony of how we reunite the African spirit here in New York and all on the continent of Africa.”