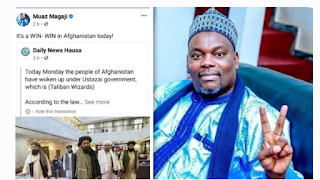 Muaz Magaji, chairman of the Kano State Gas Pipeline Project Delivery and Gas Industrialisation Committee, has deleted his infamous Facebook post celebrating the victory of the Taliban in Afghanistan.

The project will see to the transporting of natural gas from Ajaokuta in Kogi to Kaduna and Kano.

Mr Magaji, who was first sacked for celebrating the death of the late Chief of Staff to the President, Abba Kyari, and later reappointed to his current position, described unfolding developments in Afghanistan as a “win-win.”

Taliban fighters had on Sunday gained access into the city of Kabul, hijacked power, forcing President Mohammad Ashraf Ghani to flee the country.

Reacting to a story in the Daily New Hausa, announcing the Taliban government in Afghanistan, Mr Magaji said, “It’s a win-win in Afghanistan today!”

Mr Magaji’s post is reminiscent of the minister of communications and digital economy Isa Pantami’s avowed support for the Taliban.

In one of his vicious sermons in the 2000s, Mr Pantami had prayed, saying, “This jihad is an obligation for every single believer, especially in Nigeria… Oh God, give victory to the Taliban and to al-Qaeda (Allahumma’ nṣur Ṭālibān wa-tanẓīm al Qā‘ida).”