Osun: Banks shut down for Isese Day - The Naija Weekly 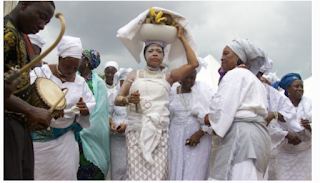 Banks and government offices in Osun have shut down on Friday for the ‘Isese Day’ celebration.

The Osun government declared ‘Isese Day’ a public holiday for traditional religion worshipers and believers to celebrate their deities and exhibit their religion.

Former Governor Rauf Aregbesola, in 2013, approved August 20 as a public holiday in the state for traditional worshipers, under Section 2 (2) of the Public Holidays Act CAP P40 Laws of the Federal Republic of Nigeria 2010.

All banks in Osogbo, the Osun capital and the government secretariat in Abere were shut down for business.

Schools in the state were all closed for the holiday, but some federal government establishments were open for business activities, as the holiday was not binding on federal civil servants.

On Wednesday, Governor Gboyega Oyetola announced through the Osun Commissioner for Home Affairs, Tajudeen Lawal, that August 20 would be a public holiday to commemorate the 2021 Isese Day.

Mr Oyetola, however, noted that the public would not mark the 2021 festival with the usual fanfare because of the increasing rate of the third wave of COVID-19 in the country.

He appealed to the worshipers to be peaceful and law-abiding in their conduct before, during and after the festival, urging them to observe all COVID-19 protocols, especially the use of nose masks and social and physical distancing among other rules.