Overloaded trucks to be fined up to N10 million, Fashola says - The Naija Weekly

Home News Overloaded trucks to be fined up to N10 million, Fashola says

Overloaded trucks to be fined up to N10 million, Fashola says 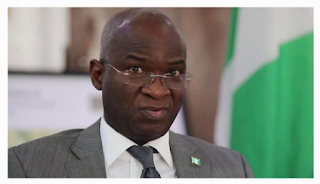 He said this on Thursday, while inspecting the refurbished Digital Truck Weigh Bridge at Old Toll Gate along Lagos-Ibadan Expressway.

Mr Fashola said the measure was not just about tolling but geared towards the Highway Development Initiatives of the Federal Government to curb abuse of highways causing quick degeneration.

The minister said overloaded trucks usually constituted danger to themselves, the infrastructure and other road users and appealed to the media to join in sensitisation to end the ugly trend.

“No matter how beautiful, how well designed the highways are, they are built with a specification, once you don’t comply with those specifications you are abusing or misusing the assets.

“Now, those specifications are global. So, they are not Nigerian made, every country in the world has subscribed to them. And so, if we see things in other parts that we like how they look, it is because they are properly used.

“Nigeria is a signatory to the ECOWAS Axle Load Regulation signed by all ECOWAS countries, and one of the first things President Buhari did in the first term of his administration was to ratify that convention locally.

“So, those are the regulations that you see, that we have published on that wall just to further educate people, they have been gazetted showing the approved axles per truck and type of truck and what each truck can carry,” he said.

He said as minister, his office empowered him to make regulations, hence the new calibrated bills for contravention of axle loads.

Mr Fashola said the fines against erring articulated vehicles were from N1 million to over N10 million to serve as deterrent.

“The reason we have also done this is we want to make it cheaper to comply and very expensive to break the law,” he said.

He said the federal government was fixing weight bridges to regulate axle load to increase the lifespan of the highways while at the same time creating thousands of jobs.

The minister said the weigh bridges would generate 50,000 direct jobs and 200,000 indirect employment opportunities to boost the economic livelihood of Nigerians.

Mr Fashola said the weigh bridge was among others built with international standard to preserve the lifespan of the roads and that it would be put to use upon completion of the ongoing Lagos-Ibadan Expressway project.

The Minister explained that the planned return of tolling and the weigh bridge, were part of a Highway Development Initiative that had the enforcement side, and economic value through direct and indirect employment opportunities.

Mr Fashola said the facility had the capacity to divert trucks to inspection points as well as warehouses to cater for excess charge and trans-loading in collaboration with transport unions.

Earlier, the Federal Controller of Works in Lagos State, Olukayode Popoola, explained that the weigh bridge constructed in 1974 would prevent trucks with excessive load causing increased spending on road repairs.

The Buhari regime announced the return of toll gates on federal highways in August, 18 years after the policy was abolished by the then-Olusegun Obasanjo government for being unuseful and a conduit for siphoning government revenue.