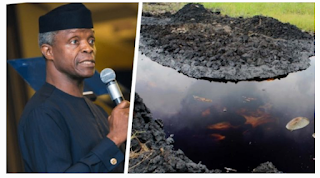 The vice president said the PIA would also create a better-managed petroleum industry with more value addition for investors and Nigerians alike.

In a statement on Monday, Mr Osinbajo’s media aide Laolu Akande said the vice president spoke at a virtual event to commemorate the 25th anniversary of Sahara (Energy) Group.

President Muhammadu Buhari, on August 16, signed the Petroleum Industry Bill (PIB) 2021 into law. Mr Buhari had also approved a steering committee to oversee the process of implementation of PIA.

The gas initiatives of the federal government include the drive to encourage investments in gas production and optimise the nation’s enormous gas potential.

“Locally, we launch into the brave new world for the oil and gas industry with the PIA 2021. This happily converges with the launch of the Year 2020 to 2030 as the ‘Decade of Gas Development for Nigeria’. This is a follow-up to the highly successful initiative of the Year 2020 as the Year of Gas.”

Mr Osinbajo explained that the main goal of the PIA and the gas initiatives was to transform Nigeria into a gas-based industrialised nation through an enhanced accelerated gas revolution.

According to the vice president, the next 25 years will define the energy industry. Mr Osinbajo commended Sahara Group for being a great ambassador for the Nigerian entrepreneurial brand.

“The group has demonstrated bold, innovative, knowledge-driven business models that are designed to seize opportunities in other countries and have done so with remarkable success in many African countries,” he stated.

Mr Osinbajo noted that the EU, the UK, Germany, Denmark, the Swedfund from Sweden, CDC, the European Investment Bank, and the Investment Fund for Developing Countries, etc., had banned public investments in “certain fossil projects, including natural gas.”

“The World Bank and other multilateral development banks are being urged by their shareholders to do the same. The AfDB is increasingly unable to support large natural gas projects in the face of shareholder pressure from their European members.” added the vice president.