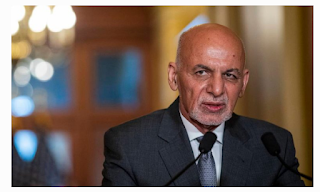 The President of Afghanistan Ashraf Ghani fled the falling country with four vehicles and a helicopter filled with cash.

“Four cars were full of money, they tried to stuff another part of the money into a helicopter, but not all of it fit. And some of the money was left lying on the tarmac,” Mr Ischenko told Reuters.

On Sunday, Mr Ghani, whose current location is unknown, left the presidential palace in Kabul, saying he wanted to avoid bloodshed.

The Taliban swept through Afghanistan last week, claiming most of its large provinces before closing in on Kabul on Sunday and demanding an unconditional surrender of the government.

The Taliban’s takeover of the country in light of the U.S. withdrawal of its military forces marks the end of two decades of war efforts.

The U.S. had set the complete withdrawal of U.S. forces in Afghanistan for September 11 to mark the 20th anniversary of the 9/11 attacks. President Joe Biden’s administration had projected a couple more months before the extremist group took total control of the country.

In light of the unfolding events, Mr Biden warned the Taliban not to interfere with the US evacuation from Afghanistan, threatening “devastating force, if necessary.”