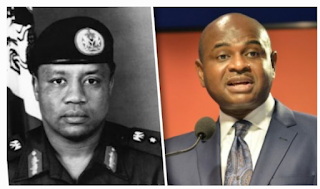 Kingsley Moghalu, a presidential candidate of the Young Progressives Party in the 2019 election, has endorsed the junta of the dictator Ibrahim Badamasi Babangida otherwise known as IBB.

Mr Moghalu stated this in a congratulatory birthday message in honour of Mr Babaginda, who turned 80 this week.

“As elder statesman and former military President Gen. Ibrahim Babangida turns 80 today, I wish him a happy birthday and long life,” the 2023 presidential hopeful said in a tweet on Wednesday.

“In the context of his era in power in which military rule was normal in Africa, he achieved much,” Mr Moghalu reasoned. “But like every leader, was imperfect. Respect,” he added.

As elder statesman and former military President Gen. Ibrahim Babangida turns 80 today, I wish him a happy birthday and long life. In the context of his era in power in which military rule was normal in Africa, he achieved much, but like every leader, was imperfect. Respect. pic.twitter.com/PnzxR3DuzW

Mr Babangida is infamous for his annulment of June 12, 1993, presidential election widely believed to be won by MKO Abiola. The dictator’s junta was also notorious for its vicious violations of human rights and violent assassination of Newswatch editor Dele Giwa through a parcel bomb.

The so-called evil genius has refused to apologise for the atrocities committed under his junta and his repressive regime was credited with institutionalising corruption in Nigeria.

In a rash of comments in an ARISE TV interview to mark his 80th birthday, Mr Babangida doubled down on his junta’s annulling the “freest and fairest” election in Nigeria, imposing an interim government on the country.

Mr Babangida, in the interview, also blamed other Nigerian apart from himself for failing to promote peace and unity in the country.