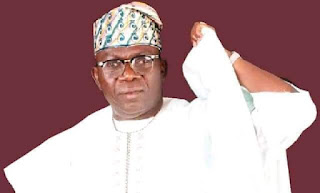 How did your ‘romance’ with apala music start?

I am the fourth generation apala singer in my family. Apala music is stressful. It needs one’s devotion and time. One needs patience to sing that genre of music. That is why there aren’t so many apala musicians.

Tell us about your childhood.

I attended Ade Cole Memorial Nursery and Primary school at Ijebu Igbo, Ogun State for my elementary education. I then proceeded to Ijebu Ode Grammar School for my secondary education. I stopped schooling after my father’s death. Before his death, I was his driver and manager. That was how I became vast in apala music. In those days, he sent my siblings abroad but refused to send me but insisted that I should join his line of work. If I didn’t follow him around then, I wouldn’t have been this vast in apala music. He had about 22 children. He died on November 9, 1983, and I formally started my music career on December 9, 1983.

What were some of the things your dad taught you that prepared you for music career?

It was my dad that renamed that style of music to apala. His father and grandfather called it ‘ewele’ music then. However, one day, my dad went to sing at a function and he met a drummer, who played his drum to my dad’s songs. My dad realised that it sounded well, so he decided to team up (with the drummer). Back then, apala music was not accompanied with drums. My dad’s name was ‘Haruna,’while the drummer’s name was ‘Ishola’ and that was what birthed ‘Haruna Ishola.’ After some time, the other man left but the band members stayed with my dad. After he left, my dad retained the name, ‘Haruna Ishola.’

Was there any relationship between your dad and another apala legend, Ayinla Omowura?

Ayinla Omowura was based in Abeokuta while my dad was in Ijebu (both in Ogun State). According to a Yoruba proverb, a child has little to say about his elder’s history. But, Omowura once told me that my father was like a boss to him. Those I can refer to as my father’s set were in Ijebu. They included Kasunmu Adio, Ajao Oru and Sefiu Ayan. They were all apala singers and they all reigned at about the same time but God raised my dad higher.

When your father was sponsoring your siblings’ trips abroad and refused to send you. How did you feel?

I nearly cursed him and saw him as a wicked father. There was a time I even went to my mum to confirm if I was truly his biological son. Back then, I didn’t know that he (my father) was giving me something that would bring fame to me as well. Now, I am grateful to God.

What were your ambitions as a child?

I had no ambition. We were always in school. Whenever we returned from school and saw my dad rehearsing, we were always amazed. I did not imagine that I was going to take over from him. I didn’t even know I could sing well until he died and people started advising us (his family) to uphold his legacy.

How is your relationship with your siblings?

All my siblings have musical talents, and some of them compose songs for me. One of my younger brothers, Wasiu, sings fuji music. His style is similar to that of Wasiu Ayinde (K1 de Ultimate). I also have a younger sister that sings Christian music. In a nutshell, all my father’s children have the gift of singing but most of them don’t take it as an occupation.

Did you get your family’s support when you wanted to continue your father’s legacy?

In those days, if one said one wanted to take singing as an occupation, people would dismiss it. They would refer to one as being lazy. It is when one succeeds that friends and family would come around and claim to be proud of one.

When you started your career, did you retain your father’s band members?

In his band, his younger brother, Baba Shittu, was playing for him. When my dad died, he (Baba Shittu) was the one controlling his affairs.

The son of the person that played the talking drum for my father is the one playing for me now. We actually wanted to make it small but God made us big. All those that played with my dad were over 60-year-old when my father died. When I wanted to start, I gathered the children of those that played instruments for my dad, and they are now playing the same instruments for me. I didn’t even know their children could play the same instruments they (their dads) played; God just wanted it that way. When we started (our band), we were the youngest set of apala singers. However, most of the band members who started with me have left. People started saying negative things to them that their fathers worked for my dad and they should not also work for me. Things were quite tough at some point but from 1997 till date, we have not encountered any difficulty that is beyond us.

When did you release your first album?

My first album was released in 1996 and it was titled, Apala Resurrection. Over the years, I have released about 30 albums, including Fireblast, Faji Series and Happiness.

In 2003, your album, ‘Soyoyo’, was the talk of the town. Did you envisage such success when you were making it?

No one knows tomorrow. It is God that blesses the works of our hands. I believe that all my albums are top-notch, but apala music was ‘reigning’ when I made Soyoyo, coupled with the fact that God blessed the album. The joy (of people) that I was upholding my father’s legacy and the words I started the song with (God’s works are a mystery to man), also contributed to its success.

Before that time, many promoters had turned me down. Some of them claimed that my father had taken apala music with him to heaven when he died. The marketer I eventually sold the album too was Jooat Records. He owned a barbing salon and cassette stand. Meanwhile, I had gone to perform in Abeokuta and he (Jooat) was called to record the performance. After three weeks, he discovered that quite a number of people were demanding for the cassette of my live performance. He then asked me to wax a record for him. I charged him and told him he would only market the album for a year. However, for the first seven months, the album did not make any sales. It was until nine months after (the album was released) that it started recording huge sales.

What were some of the spectacular performances you had after the release of ‘Soyoyo’?

There were so many of them. Apala music took me to the United Kingdom, Canada, Dublin (Ireland), Madrid (Spain), Germany and many other places I did not envisage I would ever visit.

Some people criticised you that some of the songs on the Soyoyo album were composed by your dad. What’s your reaction to that?

Whatever belongs to a father is (transferred) to his children after his demise. I have the right to sing my father’s songs. When people refer to me as the late Haruna Ishola’s son, I get more recognition. I will continue to enjoy the goodwill of my father. It is not out of place. Should I have used Michael Jackson’s songs instead? My dad sang Soyoyo in 1968, but I polished it.

It seems you have yet to make another record more successful than ‘Soyoyo’. Do you think it is your biggest album?

We, singers, cannot judge how ‘big’ our songs are. It is the listeners that can choose the ones they love the most. As far as I am concerned, all my songs are good.

Sometime ago, you stated that apala music cannot go into extinction. What gives you that conviction, considering that there are only few young musicians singing and performing apala?

Yes, I stand by my word. These days, apala is used for hip-hop. Artistes such as Terry Apala and Q Dot sing apala. They have also started infusing apala into gospel music. Those are the reasons I think apala will continue to exist.

Which young apala musician do you think can take the genre of music to the next level?

There was a guy I met in Osogbo (Osun State) who sings apala well. However, apala music is not for lazy people. When the lead singer sings a particular line, the response (of the back-up singers) will be different, unlike what obtains in other genres (where the back-up singers repeat what the lead sings). Also, the back-up singers can sustain a chorus for over three minutes. Those are some of the things that make me say that it is not a genre of music for the lazy.

Is there any of your children interested in apala music?

There is none. Perhaps, they are scared of me, and might pick it up later. My dad did not know I would go this far with apala music but I built on the things I had learnt while following him around in his lifetime. Anybody that wants to sing apala would have to learn for about nine years to master it. Not many people have the patience to learn a genre of music for that long. My dad was not educated, so he crammed the lyrics of his songs but I write mine down.

Which of your albums is your favourite?

I love all the albums I have made. I always work hard to make all my songs. I was just lucky (coupled with the grace of God) that Soyoyo was a hit album. I have better albums that people did not pay attention to. I have released over 12 albums after Soyoyo, including Authentic and London Trip.

What do you think make Soyoyo such a big hit?

Do you still make money in form of royalties from ‘Soyoyo’?

Yes, I still make money from it. The songs are all online now and I make money from that avenue too. Uploading my songs online has helped me greatly and I am enjoying the results I’m getting.

What are you working on presently?

A lot of my songs are online at the moment. They include Shikobe, Lori Iro and Ijebu Alare. I plan to release an album next year when everywhere is settled.

How do you relax?

I am usually at home, rehearsing.

There are usually rifts among musicians. What’s your experience in that regard?

I don’t have any rival.

Is it because there aren’t many people singing apala?

There are many apala musicians out there. However, all apala songs are proverbial, and it is easy to interpret the songs wrongly, thinking that they are directed at a particular person.

How do you manage female admirers?

Any job that one does that does not have female admirers cannot be successful. I cannot ask women not to come to me.

What last words do you have for your fans?

I thank all those who love me. I acknowledge my father’s fans and my fans too. Please, don’t leave me, because you are the reason I am here.