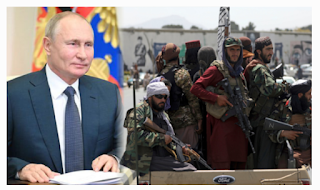 Russia says it sees the risk of a civil war in Afghanistan but will not interfere in their case.

“There is the risk of a renewed civil war in Afghanistan,” Kremlin’s spokesman Dmitry Peskov said on Monday.

“Of course, no one intends to interfere in these events,” Mr Peskov said when asked about possible Russian intervention in the conflict.

But he said the current situation posed “an additional danger and threats.”’

Russia was watching the triumphant advance of the Islamist Taliban in Afghanistan with concern.

Among other things, it feared that fighters in Central Asia could penetrate former Soviet territory.

Moscow has long been engaged in negotiations with the Taliban, who took power in Afghanistan just over a week ago.

According to Russia’s state arms export company Rosoboronexport, demand for Russian weapons can increase due to the Afghanistan crisis.

“If there is a need among neighbouring countries or our partners, we are ready to respond,” said Rosoboronexport’s head, Alexander Mikheyev.