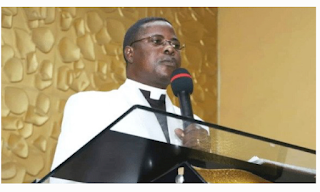 The United Apostolic Church of Christ (UACC) Worldwide has rejected same-sex marriage, saying it is un-African.

He added said any Western culture creeping into Africa should be subjected to scrutiny, adding that God did not make a mistake creating males and females.

During a press conference, the church leader said this to mark the end of the church’s 56th supreme executive council meeting at its headquarters in Lagos.

While reviewing some universal issues that affected the Christ-like life of Christians, Mr Owoyemi explained that same-sex marriage would bring an end to mankind on earth.

“It is an aberration for a man to take another man instead of a woman into the sacred union of marriage,” he reasoned.

“Such will halt human propagation in society.

As Africans, such is satanic and negates the purpose of God for man and should be rejected outright.”

He commended the ninth National Assembly for discarding the bill that sought to make same-sex marriage legal in Nigeria.

The cleric stressed that the Bible and “culture of man” should be the guide and not figments of the imaginations.

He called on everyone to ensure that such immorality akin to the practice in Sodom and Gomorrah before it was destroyed by God should be stopped, adding that such could spell doom for humanity if allowed.

Mr Owoyemi charged other African clerics to form missions to take the good news back to the West “undiluted to rescue them from their derailed state.”