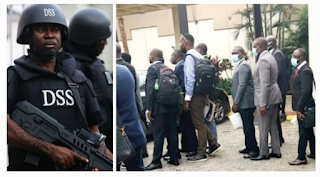 The State Security Services (SSS) says media reports claiming it forcefully dispersed doctors attending a Saudi Arabia-organised job interview in Abuja on Friday did not adduce any evidence to implicate it.

SSS spokesman Peter Afunnaya claims the media did not verify the information before going to press.

“No further evidence was also adduced to prove that the DSS carried out such operation at the hotel. It is obvious that the news is only designed to embarrass the organisation,’’ Mr Afunnaya stated in his rebuttal on Friday in Abuja.

Peoples Gazette had reported how officers of the SSS opened fire around the Sheraton Hotel venue of the job interview Friday morning.

The secret police officers mounted a barricade outside the hotel to block people seeking to enter through Abacha Estate, according to one of the doctors who identified himself as Dr Olubanjo in a telephone chat with The Gazette.

He said the SSS officers shot into the air, threatening to kill the determined job-seekers if they did not rescind.

A spokesman for the SSS did not return The Gazette’s request seeking comments on the development at the time.