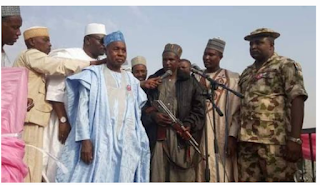 Save Katsina Group has kicked against the call that Governor Aminu Masari should resign for asking Nigerians to arm themselves against bandits.

Coordinator of the group Hamza Saulawa, in a statement on Sunday, explained that the call was “in line with section 33 of the 1999 constitution of Nigeria which guaranteed self-defence for Nigerians.”

Mr Saulawa noted that the action was also in line “with section 286 of the Nigerian Criminal Penal Code.

He added that the Firearm Act also empowered Nigerians to apply for the possession of arms legally.

“Looking at the foregoing, it is unfair and preposterous for anyone to blame Masari for his call for people to defend themselves against bandits,” Mr Saulawa reasoned. “We wondered why some self-seeking individuals and acclaimed politicians have taken it upon themselves to join issues with the government instead of partnering with it to end the menace of insecurity affecting our dear state.”

A group, Coalition of Northern Group (CNG), and some individuals, recently urged Mr Masari to resign over his pronouncement that the state’s residents should arm themselves against bandits.