Secondus should sacrifice his position to save party from collapse: PDP caucus - The Naija Weekly

Home Politics Secondus should sacrifice his position to save party from collapse: PDP caucus

Secondus should sacrifice his position to save party from collapse: PDP caucus 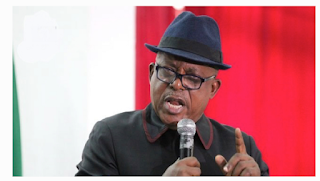 The Peoples Democratic Party (PDP) caucus in the House of Representatives has called on the party’s National Chairman, Uche Secondus, to resign from office to save the opposition from collapse.

The caucus made the call in a communique signed by its chairman, Kingsley Chinda (PDP- Rivers), on Monday in Abuja at the end of an online meeting on the current crisis rocking the party.

Mr Chinda explained that the call followed the accusation of inept leadership against Mr Secondus, seen to be frustrating party members across the country.

According to the lawmaker, the situation has resulted in the mass exit of PDP members at the National Assembly. The caucus leader noted that Mr Secondus should give way for a new chairman that would pilot the party’s affairs for a fresh beginning.

“We urge the chairman to consider making the necessary personal sacrifice worthy of a leader in the party’s current and future interest, with a firm assurance of honourable regards and appreciation by the party leadership now and in years to come,” the caucus statement said. “This he will do by honourably resigning his position as party chairman immediately, to allow the party an early start.’’

Though the caucus admitted that Mr Secondus had “contributed notably” to the party, accusations levelled against are weightier.

The caucus urged the party’s board of trustees and governors to resolve the current challenges facing the party immediately.