Self Defence: Masari says governors are chief security officers only in name - The Naija Weekly

Self Defence: Masari says governors are chief security officers only in name 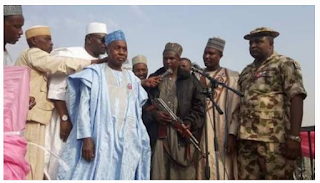 Aminu Masari, governor of Katsina, has described the assertion that state governors were the chief security officers of their states as ceremonial, stating that since security was on the exclusive list of the 1999 Constitution, it is a federal government responsibility.

According to Mr Masari, “In matters of security, a governor is the Chief Security Officer of his state only in name, because the various security chiefs working in the state take orders not from him, but from their superiors in Abuja.

“The only things they take from governors are the financial and material assistance (both solicited and unsolicited), which they extend to the security institutions in the states.”

Mr Masari was responding to a call by the state’s chapter of the Coalition of Northern Groups (CNG) for his resignation over his stance on self defence against bandits.

In a statement by his director general on media, Abdul Labaran, on Sunday in Katsina, Mr Masari said the call for his resignation for urging people to resist bandits by acquiring arms for self defence, “betrays a sheer lack of the understanding of the letter and spirit as well as the workings of the Nigerian Constitution.”

The governor had told Nigerians some days ago to “pray” and “buy guns” to defend themselves against armed bandits and other terrorising criminals.

“We must all rise up to counter the insecurity challenge, we must not sit and watch some people buying guns attacking our houses, we too should buy the guns and protect ourselves,” Mr Masari said.

This was after he charged “cowardly” citizens sometime in July not to wait for the government but deploy their teeth in self-defence against bandits.