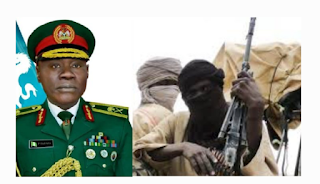 The Chief of Army Staff (COAS), Faruk Yahaya, has asked Katsina residents to assist security agencies with correct information on the whereabouts of bandits in the state.

Mr Yahaya made the call when he visited the Emir of Daura, Umar Faruk, at his palace Friday.

“Our efforts in tackling the issue of insecurity in Nigeria cannot be achieved without providing us with necessary information about the criminals,” Mr Yahaya said.

According to him, the criminals were members of the society who mingled with the people in public places, saying it would not be difficult for the people to provide the security agencies with correct information about them and their hideouts.

Explaining that the Army was also collaborating with other sister agencies in tackling the security challenges, Mr Yahaya said, “We will not relent until we ensure that our people sleep with their two eyes closed. That is why we embarked on this operational tour to boost the troops’ morale.”

Responding, Mr Faruk commended the efforts of the COAS towards boosting the morale of the troops, saying that such an effort would give them more confidence.

According to Mr Faruk, “I have confidence that you will never fail President Muhammad Buhari’s effort over the security of the country.”

Mr Yahaya had on Thursday paid a similar visit to the governor of Katsina, Aminu Bello-Masari, and Abdulmumini Kabir-Usman, Emir of Katsina.