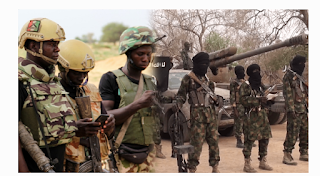 Army spokesman Onyema Nwachukwu disclosed this in a statement on Monday in Abuja.

Mr Nwachukwu said the troops of 25 Task Force Brigade successfully quelled a dawn attack attempt on the town in the early hours of Sunday by terrorists.

He said the terrorists tried to infiltrate the town but resisted the Nigerian troops, adding that the terrorists suffered gunshot wounds, forcing them to beat a retreat.

The army spokesperson added the troops were currently on the trail of the fleeing terrorists, disclosing that two vehicles belonging to the Civilian Joint Task Force were razed in the exchange of fire that ensued.

According to the army statement, troops fighting in the North-East “are encouraged not to allow any form of distraction from the marauding terrorists, whose ranks have suffered enormous depletion in manpower as a result of ongoing air and artillery bombardments.”

The army added, “Law-abiding people of North-East Nigeria are assured of the chief of army staff’s determination to finally rout the Boko Haram/ISWAP criminals from their hideouts.

“The good people of the North-East are also encouraged to continue to avail the troops with actionable information that will enhance the execution of the ongoing ‘Counter-Terrorism Counter Insurgency’ operations in the region.”