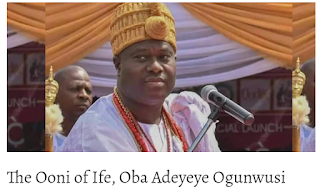 Ooni’s Caucus, a Yoruba group recently inaugurated by the Ooni of Ife, Oba Adeyeye Ogunwusi, will in the coming weeks meet with top Yoruba political and traditional leaders towards seeking solutions to the challenges facing the South-West.

Those on the list the caucus will meet include former President Olusegun Obasanjo; Nobel laureate Prof Wole Soyinka; and the leader of Yoruba sociocultural group, Afenifere, Chief Ayo Adebanjo.

The Coordinator of Ooni’s Caucus, Mr Akin Osuntokun, in a chat told Saturday PUNCH that the meeting with the leaders was in line with the caucus’ objectives, adding that the meetings were to seek the leaders’ blessings and counsel in the pursuit of Yoruba interests.

He also said the meeting with the Ooni would come within the next two weeks.

“We will consult with them on the sustenance and promotion of the collective welfare of the Yoruba, especially against the backdrop of the present political crisis. We will seek their blessings and counsel on how best to proceed in the pursuit of this objective.”

The caucus was in the news last week after its appointment with the Alaafin of Oyo, Oba Lamidi Adeyemi, was allegedly cancelled by the monarch on the alleged complaint that members of the group are “notorious critics” of the regime of the President, Major General Muhammadu Buhari (retd).

It was learnt that Osuntokun led about 14 members of the group to Alaafin’s palace for an alleged 11am appointment last Friday, but after waiting for about two and a half hours, the influential monarch sent words to them that he would not be seeing them on the claim that they were anti-Buhari and were also loyalists of former President Obasanjo.

The Alaafin’s palace denied the claim and stated that the monarch could not meet the caucus because they did not have any prior appointment with him.

However, the caucus has also debunked that it is partisan.

Osuntokun, in some reports, clarified that the caucus is made of seven members each were from both the Peoples Democratic Party and the All Progressives Congress. He said the remaining 14 members don’t have party affiliations.

The Ooni’s Caucus, inaugurated at the palace of the Ooni of Ife, on July 20, 2021, is made of 28 influential Yoruba persons and is being coordinated by Osuntokun, a former Managing Director of the News Agency of Nigeria.

At its inauguration, the Ooni said the caucus was formed “in order for me to better secure the honour, safety, integrity and well-being of the Yoruba heritage, especially in these challenging and perilous times.”

He said the caucus would serve as a body of primary advisers and companions to him in moving forward the institutionalisation of the ancient Oodua stool.

“Members shall individually and collectively hold the obligation to protect and project the goodwill, prestige and power of the foremost Yoruba monarchy,” the monarch said.