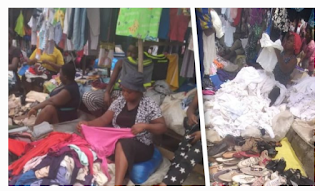 As shoppers jostle their way through narrow paths in Katangua, one of the largest second-hand clothing markets in Lagos, traders from all corners can be heard yelling to catch potential customers’ attention: “New open, select and pay, na mumu dey go boutique.”

The scene repeats itself on every market day in Katangua, especially on Mondays, Wednesdays and Fridays when the traders open new bales, as traders hustle to dispose their sought-after merchandise.

But the story is not unique to Katangua. Sale and purchase of second-hand clothing has become a big economic venture around Nigeria.

Second-hand clothing, commonly known as “Okrika”, “Akube” or “bend down select”, has been a veritable option for, not only low-income earners, but also other persons who would rather opt for it because of its peculiarities. 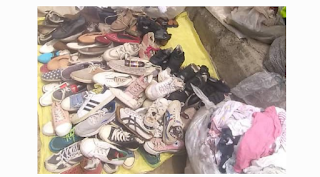 The business continues to flourish as millions of Nigerians in the low-income to middle-class bracket opt for it ahead of local textile as their purchasing power for new clothing drops.

The use of second-hand clothing has been on for decades in Nigeria. It dates back to the early post-colonial period when ships of used clothes berthed on the Nigerian shores through Okrika, a sea port in present day Rivers State, Nigeria.

Although there is no specific number of clothing in a bale, the country where it comes from determines the weight and price. Online sources said that China’s bales weigh 100kg while UK and Germany bales weigh 55kg.

Apart from Katangua, other places where Okrika cloths can be purchased in Lagos are the popular Arena Warehouse in Oshodi, Alaba International Market, Badagry market, Tejuosho market and Aswani market.

Traders of these used clothing bring in their bales through neighbouring countries and each cost from between N80,000 and N150,000, depending on if they are children, ladies or men’s wears.

Why it is popular

Although Nigeria produces textiles and ready-to-wear clothings, they are more expensive than the used ones and are of lower quality, according to people who patronise second-hand clothing.

“I have been buying them since university. I started getting pleated skirts and gradually tops. I opt for it because it’s cheaper and I get lucky to get good ones. Although I have bought a few bad ones,” Fikayo Babalola said, noting that she would still prefer the second-hand clothing ahead of local garments regardless of her financial status.

“Another thing is that one hardly gets more than one of the same cloth unlike new ones. What I do is I buy Okrika and get new ones as well but more of Okrika,” she said, adding that “They are of good quality as well and have grades, depending on what you can afford.”

Cheap, but they come in grades

In a country with over 200 million population and the highest number of poor people in the world, second-hand clothing becomes the best option based on its affordability.

As cheap as it may sound, prices of second-hand clothing vary based on their types and quality.

The imports are often packaged in grades, which determines their price. Usually first grades are most expensive, while last grades are cheapest and can go for as low as N100.

While a locally made gown shirt will go for thousands of naira, Okrika may go for as low as N500 with less common design and material.

“Okrika is expensive at times especially if they are still very new. One skirt can cost like a thousand naira and same goes for the tops, [but] It is more of like, first come, first serve. But I don’t buy okirika underwears, I prefer new ones due to hygiene,” said Abiola Adeluola, a student.

“For over 10 years now, I buy second hand clothes and at times new ones because Nigerian made don’t last long, it is either the colour gets faded or the clothes get bigger after washing. Nigerian made quality is nothing to write home about at times, it is sheer luck.”

For Ms Adeluola who would rate Okrika eight on a scale of 1-10, she would “still go for first grade okrika,” even if she has all the money, but may consider getting, ready-mades “if they are of good quality.”

In March 2019, the Central Bank of Nigeria (CBN) imposed restrictions on foreign exchange access to importers of textiles and other clothing materials.

According to the CBN governor, Godwin Emefiele, the restriction was to revive the country’s textile industry to ensure growth.

“Accordingly, all FOREX dealers in Nigeria are to desist from granting any importer of textile material access to forex in the Nigerian Foreign Exchange market,” he said.

“You know the CBN does not carry guns, arms or have to be at the border posts but we know what we will do to make it difficult for those smugglers to bring in those things into Nigeria and we will unfold those to you.”

“So when we make it difficult for them to smuggle those things into the country, it opens the market for you so that those who would have gone to buy those things will be forced to come to you,” he said.

Although, the government’s policy is targeted to revive the country’s ailing textile industry, majority of Nigerians need affordable and good quality cloths.

Second-hand clothing might be an impediment to the local industry, but it creates alternatives for poor Nigerians and even the middle class.

‘It’s all about the economy,’ expert says

Financial analyst Jide Ojo dismissed claims that locally made garments are off low quality, but attributed the unaffordability to the high cost of running businesses in Nigeria.

“The locally made fabrics from research are often of high quality and durable but the cost of doing business in Nigeria is very high and if you look at the rising cost, which is why there is always a reported call for means of doing business,” Mr Ojo said.

“The fact that people embrace second-hand clothing with all the health risks is borne out of the fact that it provides alternatives for them, it’s all about the economy. The fact remains that the rising cost of doing business locally intensifies cost. Many of these are actually clothing that are donated to charity which find their way to Nigeria and people end up using it for business after packaging.

“I recall that getting locally made adire are usually more durable, but most of these garment industries have collapsed. There was a report that Kaduna used to have 10 textile mills, but today only one is working because we have rising costs of doing business, so they’re no longer competitive.

“There is another issue of dunking, I mean if you’re talking of foreign goods that are new, sometimes they dunk it and make it cheaper in Nigeria because they want to kill local industries and have full control of the market. But talking about used clothing that is donated to charity abroad, some of our people find it convenient to transport it down and sell it at a high price. And I think it’s the pricing that make people buy it and not because of the quality.”

“If you look at our own garments made in Abba, they are as durable as the foreign ones, but you can’t compare the cost,” Mr Ojo concluded.